From 2005 to 2019, Rafael Nadal has lifted 12 titles and won 93 of his 95 matches at Roland Garros. If the city of Paris dedicated a street to their adopted Spanish son, it would be apropos to make sure it went only one way.

An Infosys ATP Beyond The Numbers analysis of how Nadal performs in each of the five possible sets identifies a competitor who explodes fast out of the blocks in set one and morphs into a runaway train by set three. The data set includes players who have played a minimum of 10 matches at Roland Garros since official statistics were first recorded in 1991.

Facing Nadal on Paris' terre battue is one of sport’s greatest challenges. The Spaniard does not give opponents time to get a feel for the clay, the stadium or the moment. He jumps on them immediately, attempting to end the contest before it becomes one.

The leading five players with the highest percentage of games won in set one at Roland Garros are:

Set Two
Set two represents second gear as Nadal moves up another level to create a wider margin between himself and his opponents. Nadal has won 66.2 per cent (561/848) of games in the second set, showing no signs of letting up and allowing opponents an opportunity to level the match.

The leading five players with the highest percentage of games won in set two at Roland Garros are:

When Martin Verkerk arrived at Roland Garros in 2003, the Dutchman was searching for his first victory at a Grand Slam event after first-round losses on his tournament debuts at the 2002 US Open and 2003 Australian Open.

The 24-year-old entered the event in the best form of his career, having reached the semi-finals in St. Poelten and the quarter-finals at the Internazionali BNL d’Italia earlier in the month. But, despite his form, Verkerk could not have expected what followed in Paris.

After a first-round win against Zeljko Krajan, the 6’5” right-hander survived a five-set battle against Luis Horna, came from a set down to beat Vincent Spadea and stunned World No. 11 Rainer Schuettler to reach the only Grand Slam quarter-final of his career. In fact, it was the only time the World No. 46 advanced beyond the third round at a Grand Slam event.

Waiting in the last eight was 1998 champion Carlos Moya, the winner of clay-court titles in Barcelona and Buenos Aires earlier in the year. The Spaniard had also dropped three sets en route to the last eight, highlighted by his five-set battle against Juan Ignacio Chela in the third round.

In his first ATP Head2Head meeting against the World No. 4, Verkerk showed no signs of nerves. The Dutchman gained early breaks in both the first and second sets and maintained his advantage on both occasions with consistent power and accuracy on his serve.

Moya had twice come from two sets down to reach a fifth set at Roland Garros, and the Spaniard’s greater experience paid off at the end of the third set. Serving under pressure at 5-6, Verkerk committed a double fault to hand Moya a route back into the match. The Mallorcan also applied pressure on his opponent late in the fourth set, breaking serve for a second time to force the quarter-final to a deciding set.

Each of the opening four sets was decided by a single break, and the final set would be no different. After 12 consecutive holds, the animated Dutchman fired multiple forehand winners to earn the opportunity to serve for the match at 7-6. Verkerk fist pumped and gave a wide-eyed stare to his player box. 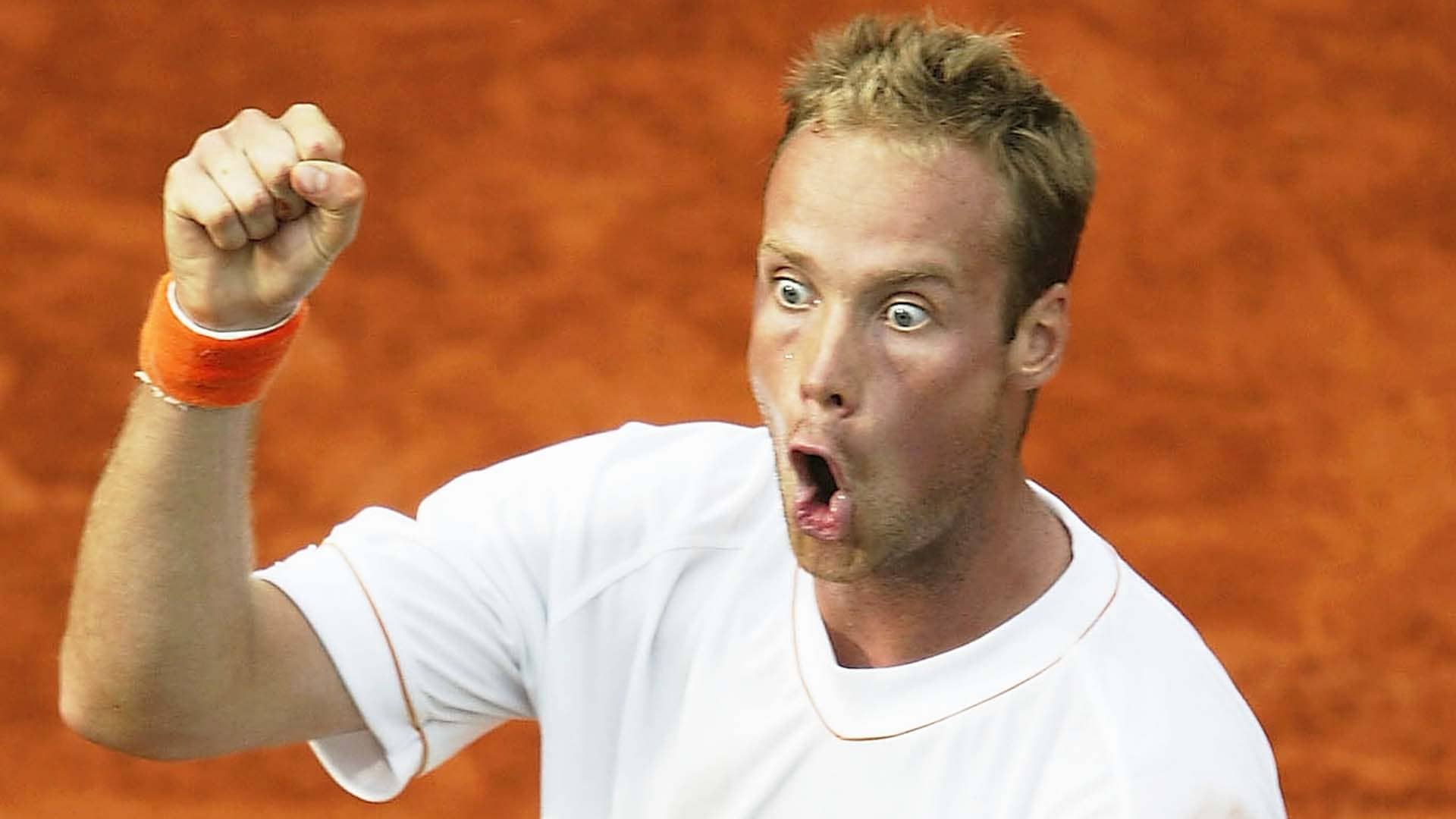 In the biggest game of his life, so far, Verkerk relied

Juan Carlos Ferrero wasted little time showing his prowess on the Parisian terre battue of Roland Garros. In his first three appearances at the clay-court Grand Slam, the Spaniard reached the semi-finals twice, and then the championship match in 2002. Backed by a potent forehand and undeniable speed, Ferrero was clearly on the verge of a breakthrough.

“It was one of the tournaments that from when I was 14, 15, it was my dream to go there to play,’ Ferrero told ATPTour.com. “Winning that tournament at the end, it was one of the greatest things that I ever did in my tennis career.”

Ferrero wasn’t able to simply waltz across the clay to lift the Coupe des Mousquetaires in 2003, though. Although he was one of the leading contenders, Ferrero had withdrawn from his Rome semi-final against Roger Federer while trailing by a set and a break due to an arm issue.

“If his arm is not 100 per cent, there's no way he can go out and win against the best clay-courters in the world over the course of two weeks and seven matches,” former World No. 11 MaliVai Washington wrote for ESPN at the time.

But Ferrero did not compete between Rome and Roland Garros, opting to focus on his preparations for the season’s second major.

“Of course it’s something that I did to be safe. When you have some pain before the tournament, you have to take care of it a lot,” Ferrero said. “In that moment, I had a very important tournament [coming up] and always you try to be safe and calm in that moment and try to care for the situation.”

“It was one of the toughest matches that I had in the tournament,” Ferrero said. “Playing Fernando Gonzalez was always special for me because we played many times in the juniors. We played many battles, and obviously he was a very good player on clay.”

Ferrero needed three hours and 29 minutes across five sets, but he was able to manouevre past Gonzalez. Both men won 181 points, and Gonzalez refused to go down without letting loose

Editor's Note: But for the COVID-19 pandemic, Roland Garros would now be underway. ATPTour.com this week reflects on memorable matches and happenings at the clay-court Grand Slam, which tournament organisers are now hoping to stage in September.

Novak Djokovic and Marco Cecchinato entered the 2018 Roland Garros quarter-finals on completely different ends of the experience spectrum. But that didn’t stop the surprise Italian from springing a memorable upset on the Parisian clay.

Cecchinato, the No. 72 player in the FedEx ATP Rankings, arrived in France without a Grand Slam main draw win. The 25-year-old had tried to qualify for the clay-court major three times, failing on each occasion. Djokovic, however, won the 2016 Roland Garros title and was competing in his ninth straight quarter-final at the tournament.

“This is the best moment of my life,” Cecchinato said after beating David Goffin in the fourth round. “Maybe it’s a dream.”

Cecchinato admitted that before playing the biggest match of his life he had nothing to lose. On the other hand, there was plenty of pressure on Djokovic.

The Serbian underwent right elbow surgery after the 2018 Australian Open, and he lost eight of 15 matches leading into Roland Garros. That made Djokovic hungry for a big result, and drawing Cecchinato in the quarter-finals seemed a good opportunity for the World No. 22 to reach the last four.

“I think it's changed [my] life,” Cecchinato said of his efforts on the terre battue.

Cecchinato and Djokovic were familiar with each other from practising together in Monte Carlo. But while the Serbian was playing in his 40th Grand Slam quarter-final, Cecchinato was experiencing the pressure of the moment for the first time.

“He didn't seem to be under the impression of the big stadium or big match,” Djokovic said. “He just held his nerves amazingly well in the important moments.”

Cecchinato, who had won his first ATP Tour title a month earlier in Budapest, appeared the more comfortable player as he earned a two-set lead. But Djokovic, still working himself into form, found rhythm and breezed through the third set and earned an early break in the fourth.

In honour of Rafael Nadal's 34th birthday, the ATP Tour is celebrating by reliving 34 facts, moments or memories that have made his tennis career spectacular thus far.

34 - Percentage of return games won for Nadal in his career.
33 - Age when the lefty finished 2019 as the oldest year-end World No. 1 in history.
32 - Consecutive matches won from 2008 Hamburg until 2008 Cincinnati, Nadal's career-best winning streak.
31 - Number of matches Nadal won at Roland Garros before his first loss at the major in 2009.
30 - Age when Nadal was Spain's flagbearer for the 2016 Olympics in Rio de Janeiro.
29 - Rafa's age when he opened his Rafa Nadal Academy by Movistar.
28th tour-level title came at the 2008 Fever-Tree Championships, setting up Nadal for his unforgettable Wimbledon run in which he defeated Roger Federer for his first trophy at The Championships.
27 - Number of Grand Slam finals Nadal has reached (19-8).
26 - Victories against Top 10 opponents at Roland Garros.
25 - Clay-court ATP Masters 1000 titles.
24 - Wins against Roger Federer (24-16)
23 - Age when the Spaniard won his 100th Grand Slam match at 2010 Roland Garros against Gianni Mina. He currently holds a 275-39 record at the majors.
22 - Age when Nadal first reached World No. 1 on 18 August 2008.
21 - Number of ATP 500 titles Nadal has won.

The ATP editorial team had another fun time reading the entries that were sent to us for the second installment of our Fan Essay Contest.

Writers aged 18 and under were challenged to write an essay of 500 words or less on the topic: 'If you could work any job at an ATP Tour event, what would it be and why?' The winning entries are featured below.

The Fan Essay Contest will run every three weeks and writers are encouraged to keep sending essays for each new question in the competition. The next topic will be announced later this week. Thanks to all of the talented writers who have entered!

A Day Interviewing On Tour
By Aditya Sharma, 16, Gurgaon, India

When I was a small kid, I sat in front of the television and saw Roger Federer defeat Jo-Wilfried Tsonga in the semi-finals of the 2010 Australian Open. After the match, Jim Courier came on court to interview Roger.

He had the audience out of their seats! I was laughing so hard for the next 15 minutes listening to the funny conversation between them. I realised that there was also a funny and casual side to tennis.

I thought that it would be so cool to be a post-match on-court interviewer. Tennis is not an easy sport. Standing next to such inspiring people who do it every day, with a microphone and having conversations with them, would be an honour to do on the ATP Tour.

I would ask them questions about their daily life and experiences. I’d get to know the human side of them and their struggles, achievements and thoughts. There are so many things that I have learned about the players through their on-court interviews. It gives an insight into their lives and all of their achievements that inspire us.

Another exciting experience of being a post-match interviewer is that you get to travel around the world to illustrious ATP Tour events. You’re in the action at the grandest ATP Masters 1000 stages like Madrid, Montreal, Monte-Carlo and Miami.

I imagine talking to a player like Roger, who has won 103 Tour-level titles including 20 Grand Slams, and Stan Wawrinka, who has three Grand Slam titles, a Masters 1000 trophy and has defeated a World No. 1 player in all of his major finals. Or to players like Andy Murray and John Millman, who have shown us that a career after threatening injurie